The Samoa Audit Office ended its financial year with a prize-giving ceremony following the Office's internal assessments of each division's performance. The awards acknowledged teams' contributions and achievements for the 12 months reviewed - July 2020 to June 2021.

The Government's monthly prayer service for July 2021 was held by the government offices the Samoa Tourism Authority, the Public Trust Office, the Samoa Trust Estate Corporation, and the Samoa Audit Office. 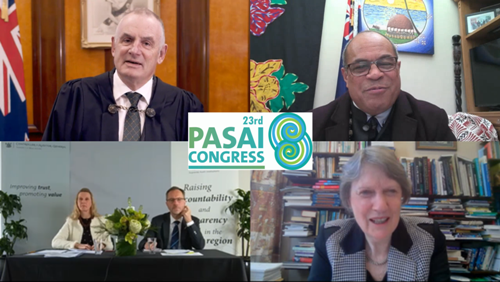 The Pacific Association of Supreme Audit Institutions (PASAI) held its 23rd Congress from the 22nd to the 24th of June 2021. Held remotely from Wellington, New Zealand, the Congress was hosted by the Office of the Controller and Auditor General of New Zealand. Representatives of 25 PASAI member country, state or territory auditors attended including from the Audit Office of Samoa.

Travel restrictions prevented Palau from hosting the Congress in 2020 as originally planned. PASAI members agreed the New Zealand Office of the Auditor General would host the Congress virtually. Participants from across the globe were able to stream the opening and closing ceremonies filmed from the significant Maori Affairs Committee Room in New Zealand's Parliament House. The online format also enabled an exceptional array of distinguished guests and keynote speakers.

The theme for the Congress was "Impact through leadership". SAI Heads discussed leadership opportunities and challenges they experienced during the pandemic. They also heard about effective communication strategies for creating audit impact with key stakeholders like the public. Half of the speakers presented live, and there were active discussions with John Ryan, PASAI Secretary-General and Auditor-General of New Zealand. Attendees were also able to engage with speakers by submitting their own questions through the platform.